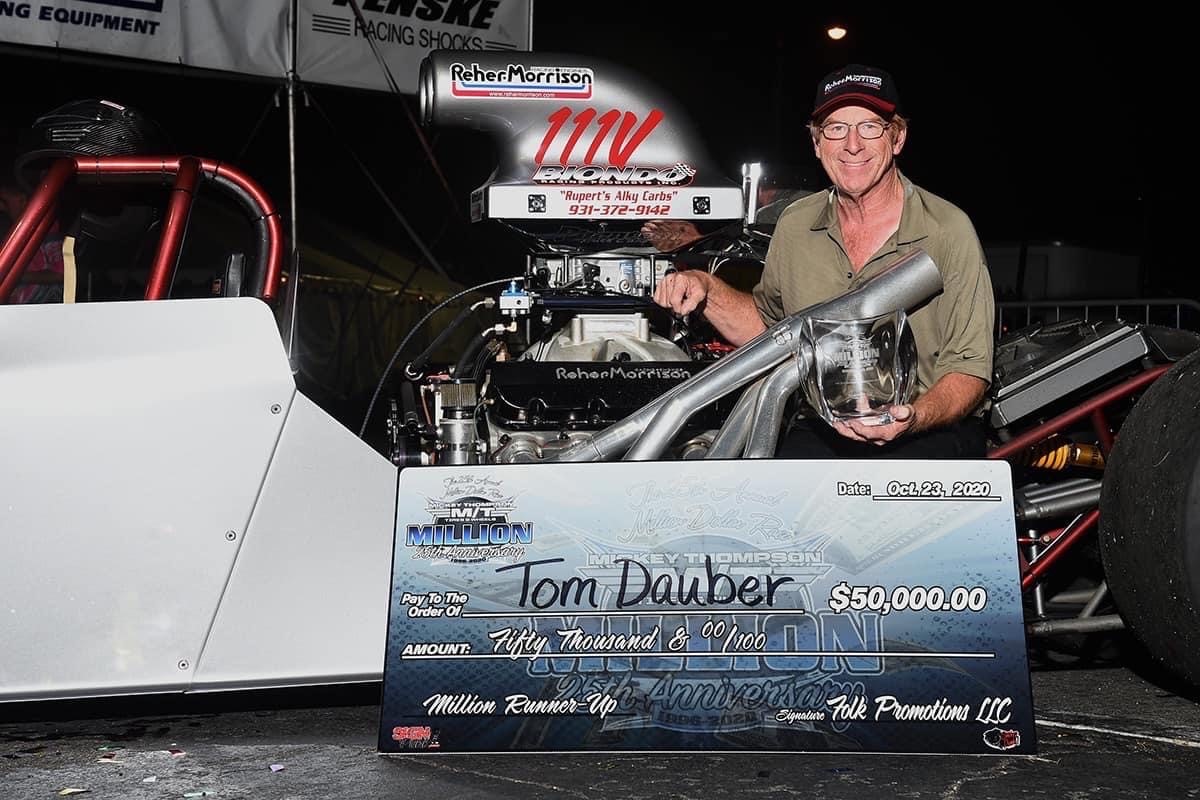 Congrats to Tom Dauber for his Runner-Up win with his Reher-Morrison 583 20º engine! 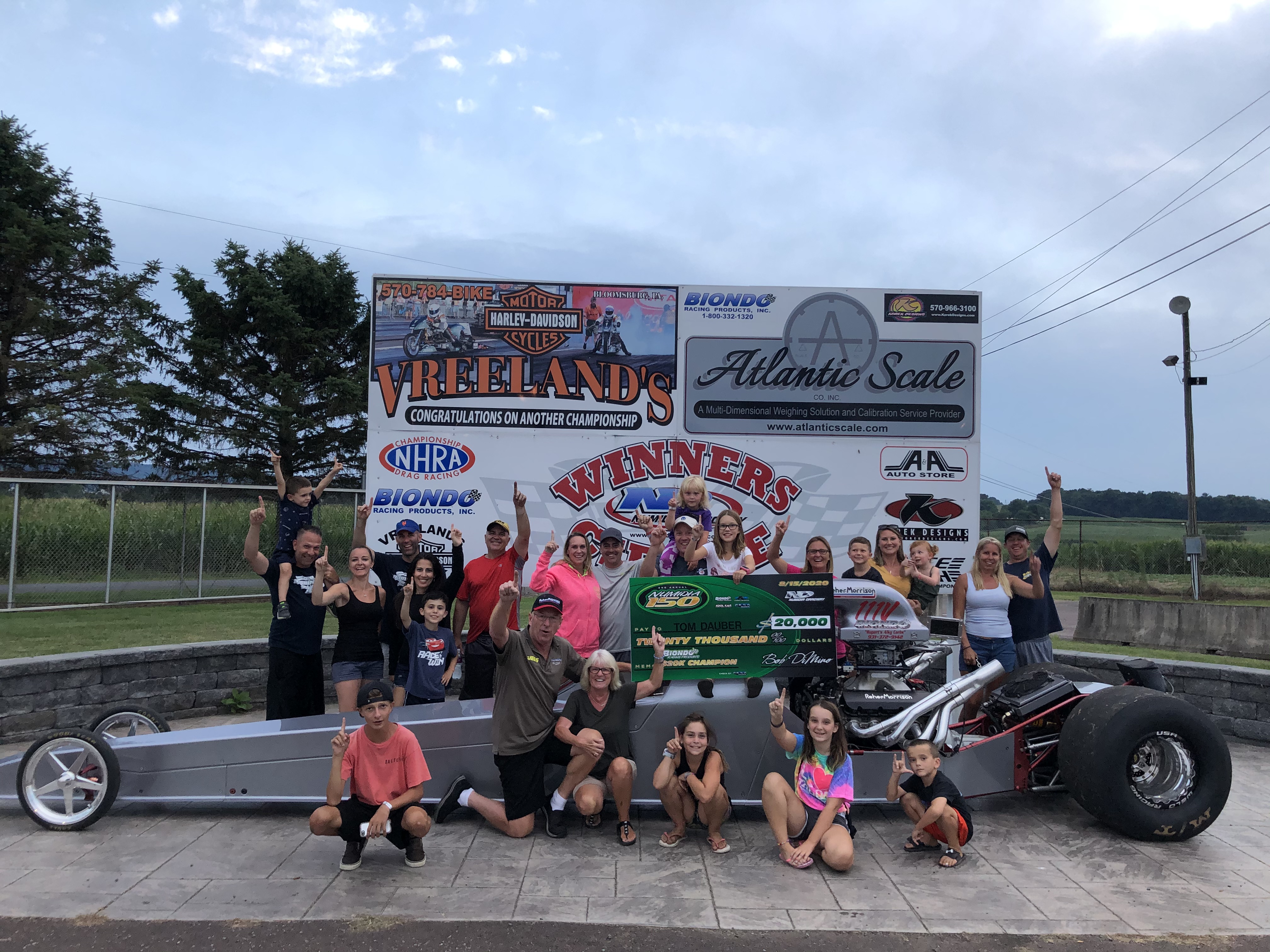 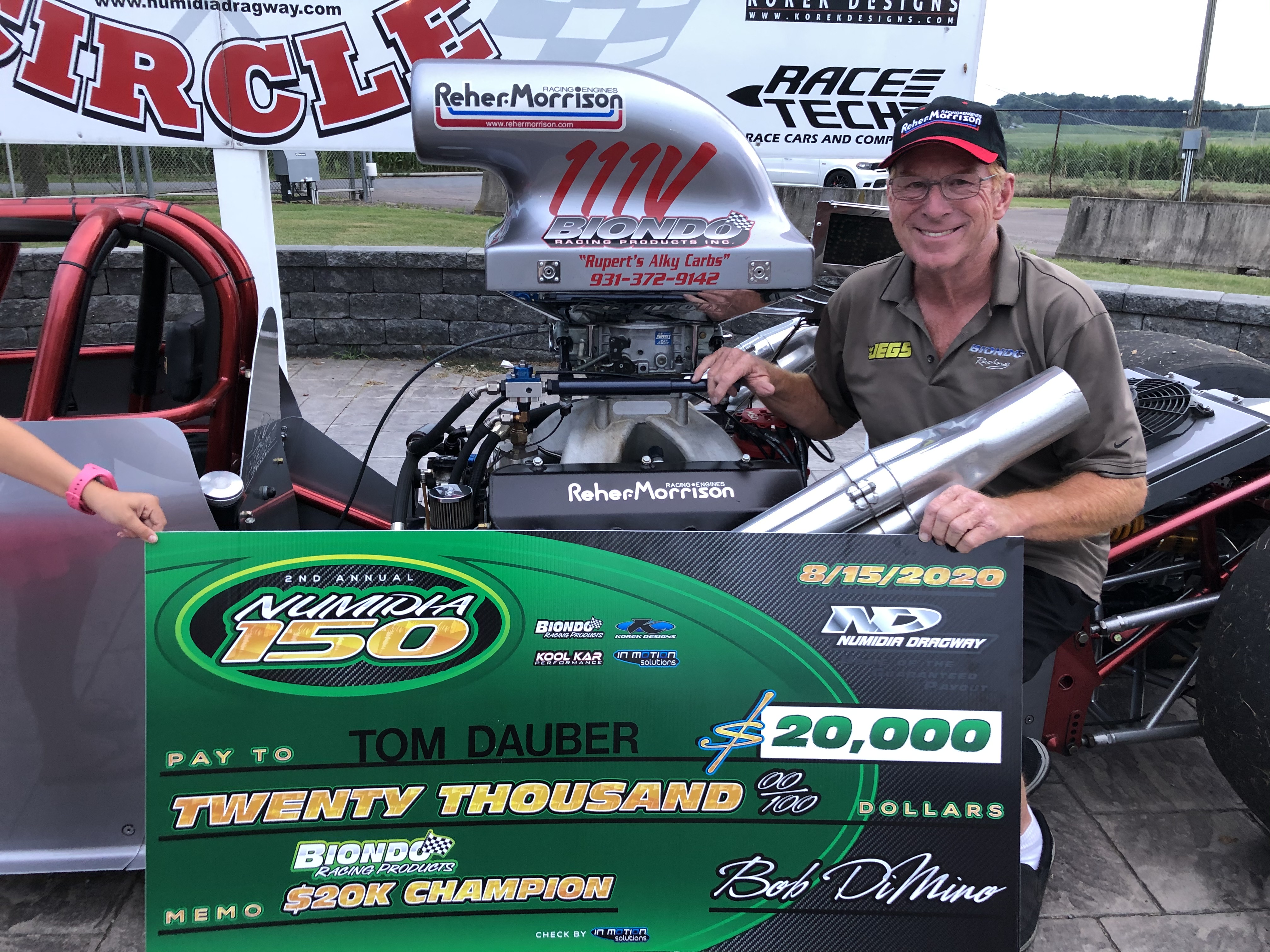 Congratulations to Tom Dauber for his win at Numida Dragway with his Reher-Morrison 20º 583 engine!

Congratulations to Dave & Jeff Pierce and Ron Muenks on their win at Midwest ProMods in Ennis,Tx! Running a Reher-Morrison 959ci engine! 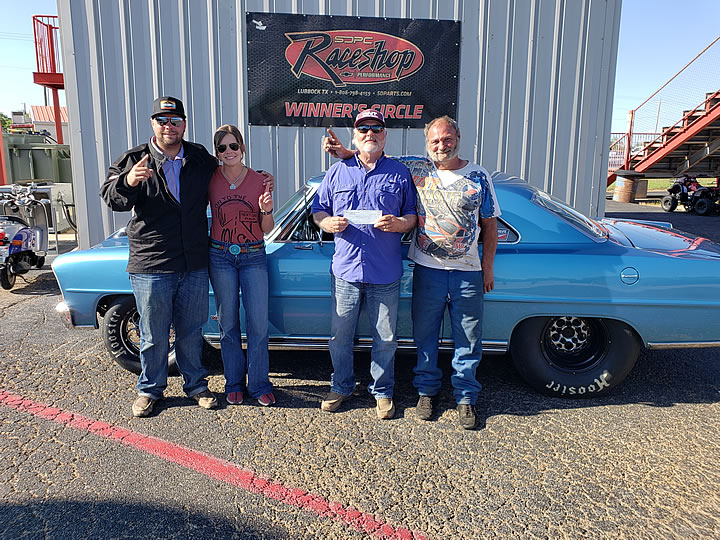 Congratulations to Bryce for his Runner Up finish in No Box running his Reher-Morrison powered 427 engine! 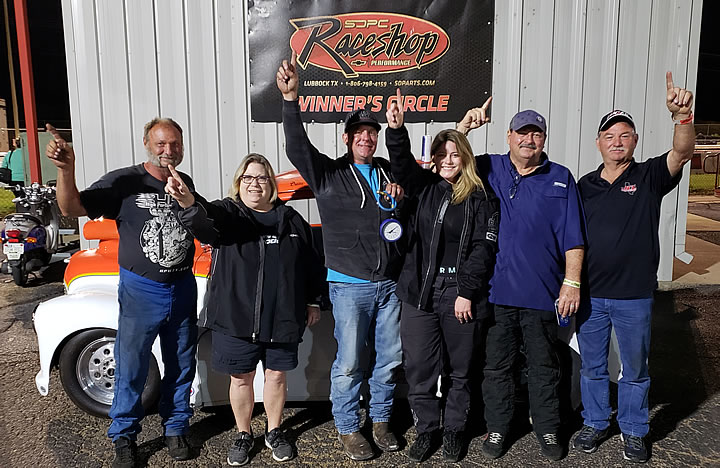 Congratulations to JJ for her Foot Brake win at Big Country Raceway in her 522 Reher-Morrison engine! 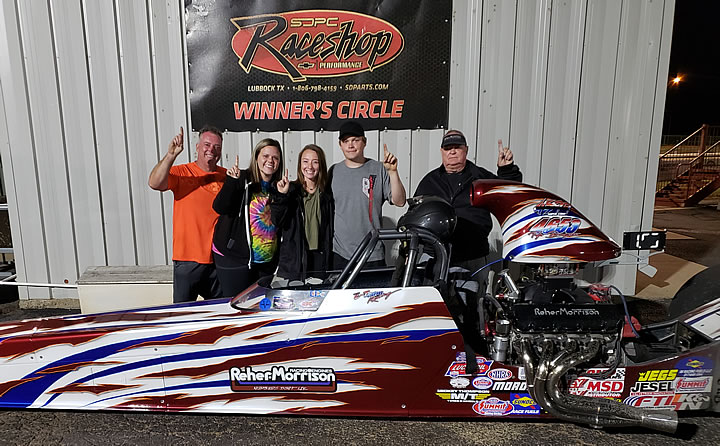 Congratulations Colton on your Super Pro win at Big Country Raceway!  Driving for the first time in a Reher-Morrison powered 583 20º Dragster! 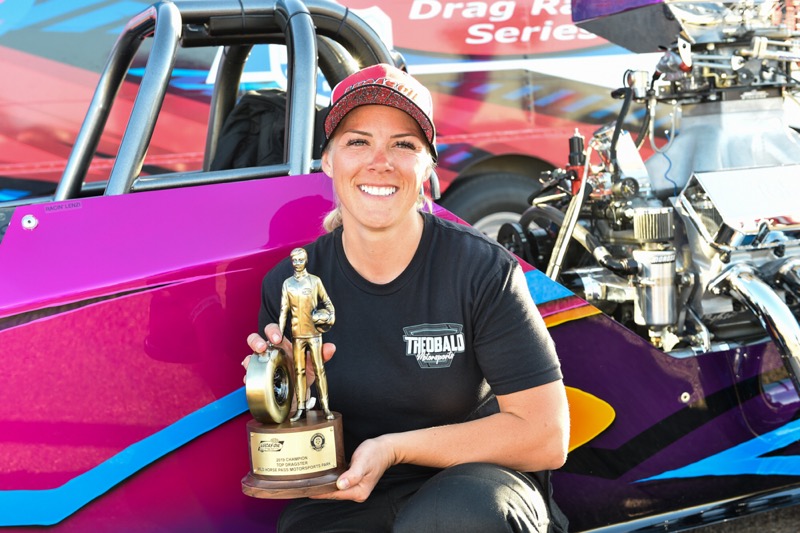 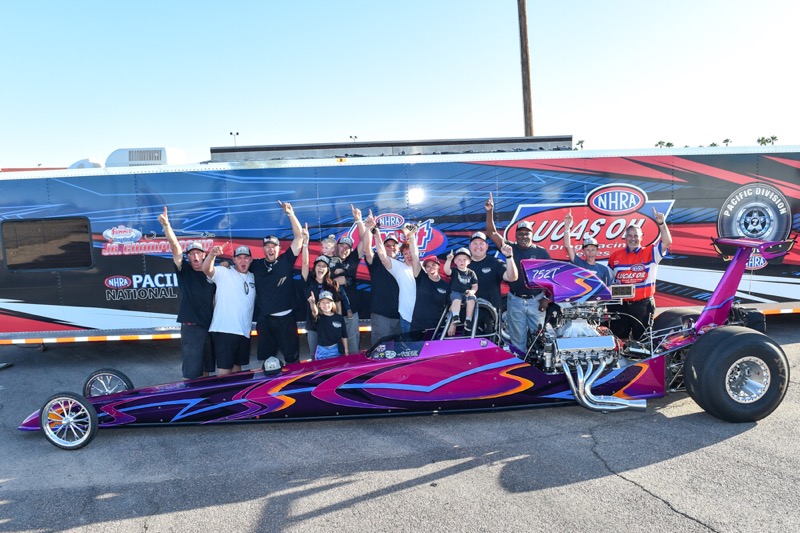 Congratulations to Linzi Theobald Meserve for her 2nd Wally win in two weeks with her RMRE 632 engine! 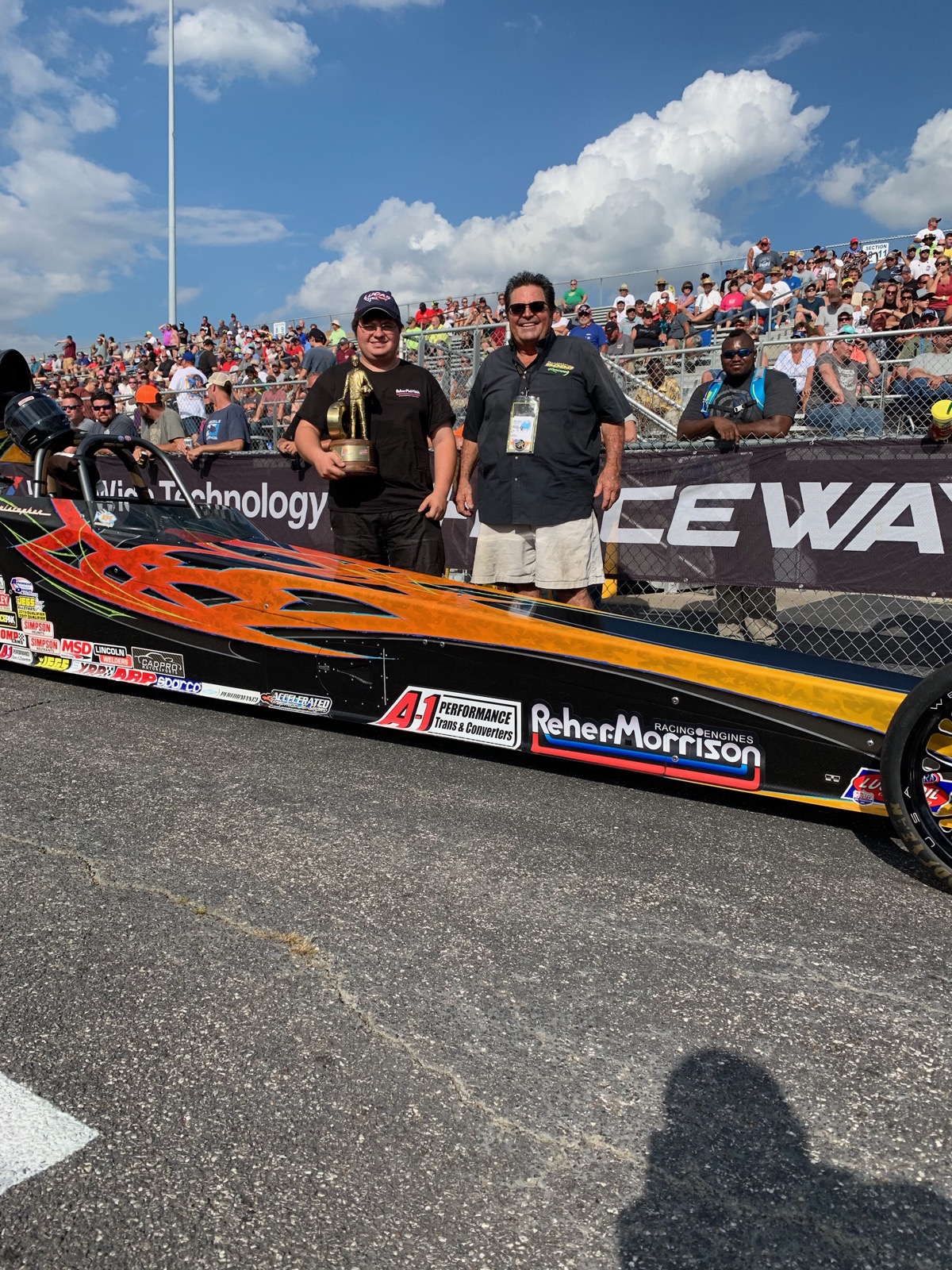 Congratulations to Christopher Dodd for winning the AAA Midwest Nationals in St.Louis, again, with his Reher-Morrison 615 Super Series Engine! 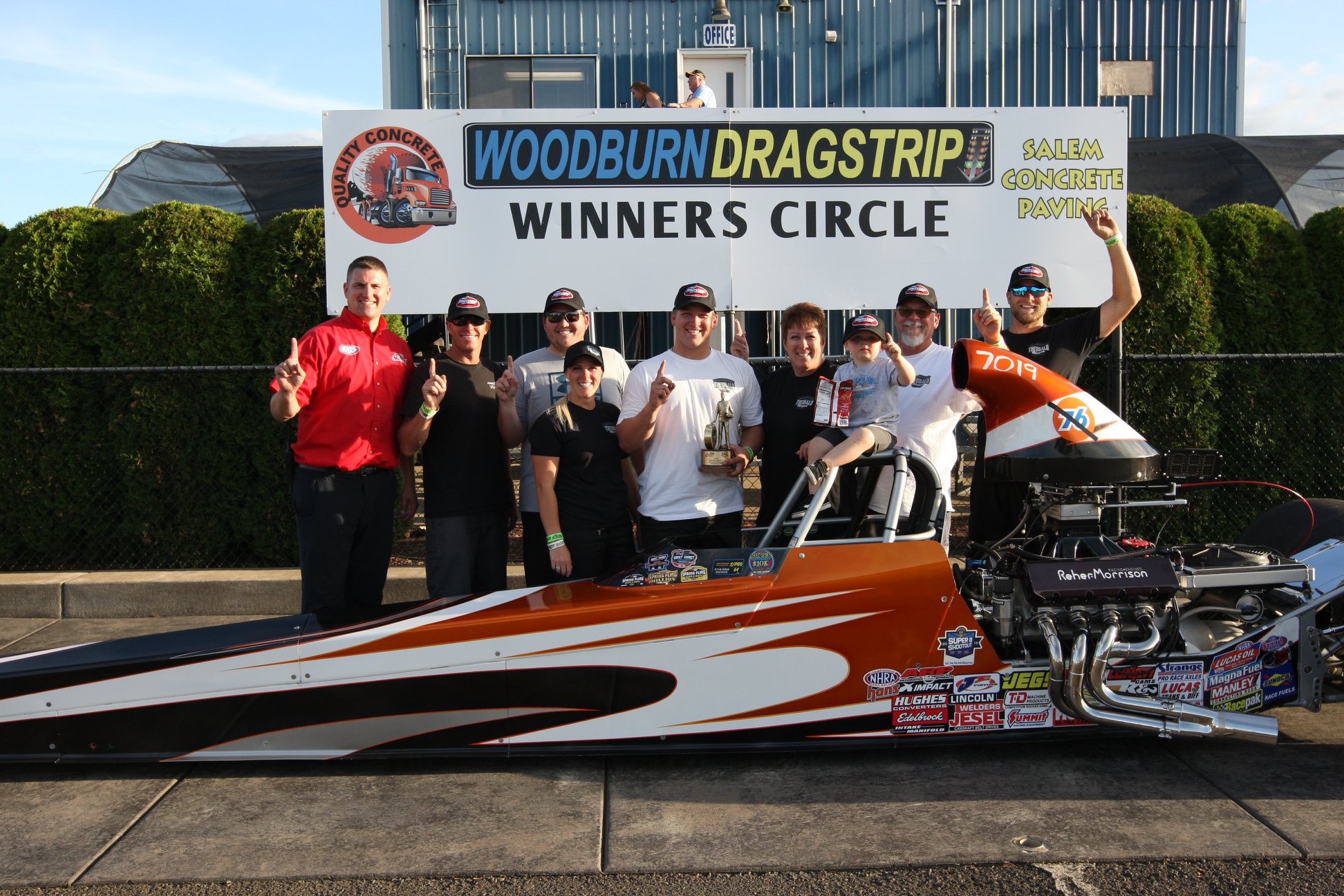 Sorry for this late news, it’s been a busy week! Last weekend at the D6 closer in Woodburn OR, Parker Theobald won in SuperPro in his Reher-Morrison 583 powered Mullis dragster and Linzi (Theobald) Meserve Runnered-up in her Reher-Morrison 632 powered Racetech Top Dragster.

Both cars in the finals! Woohoo! 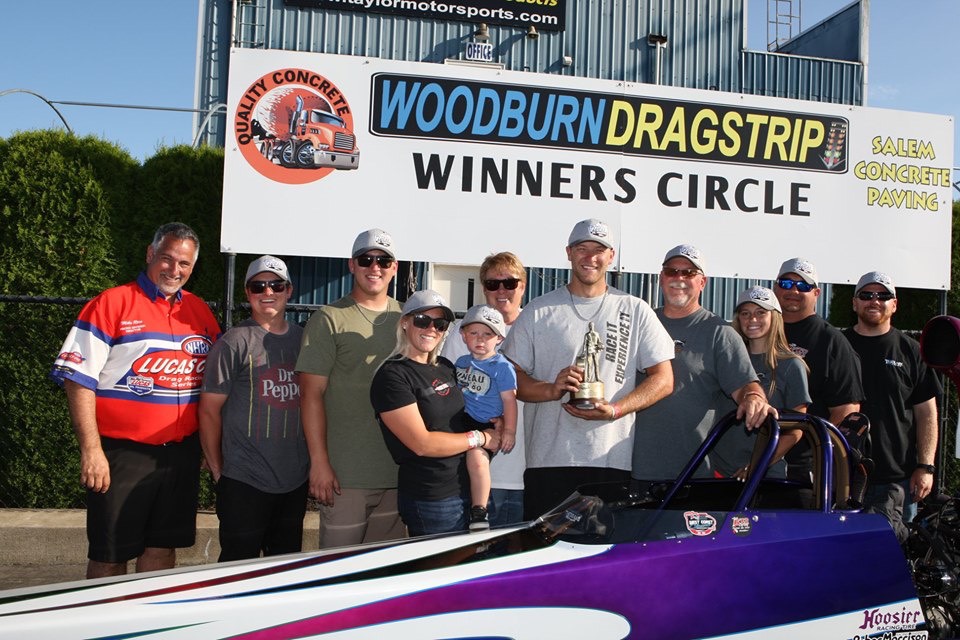 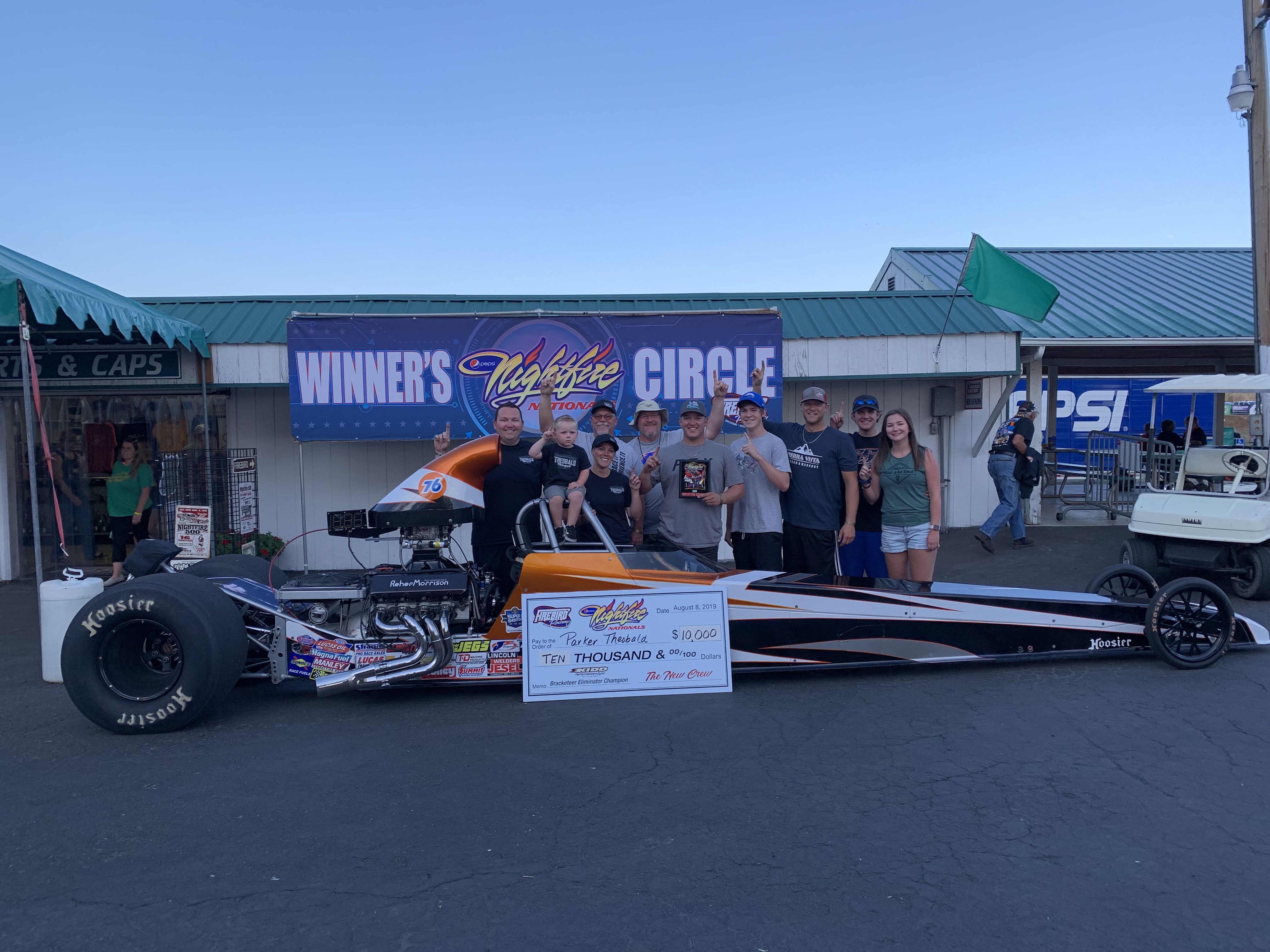 August 10th Parker Theobald wins the Super-Pro 10K NightFire race in Boise, ID in his Reher Morrison 583 Powered Mullis Dragster, then runners-up the next day at the 5K. Also named to “Drag Champ” top ten list for the week 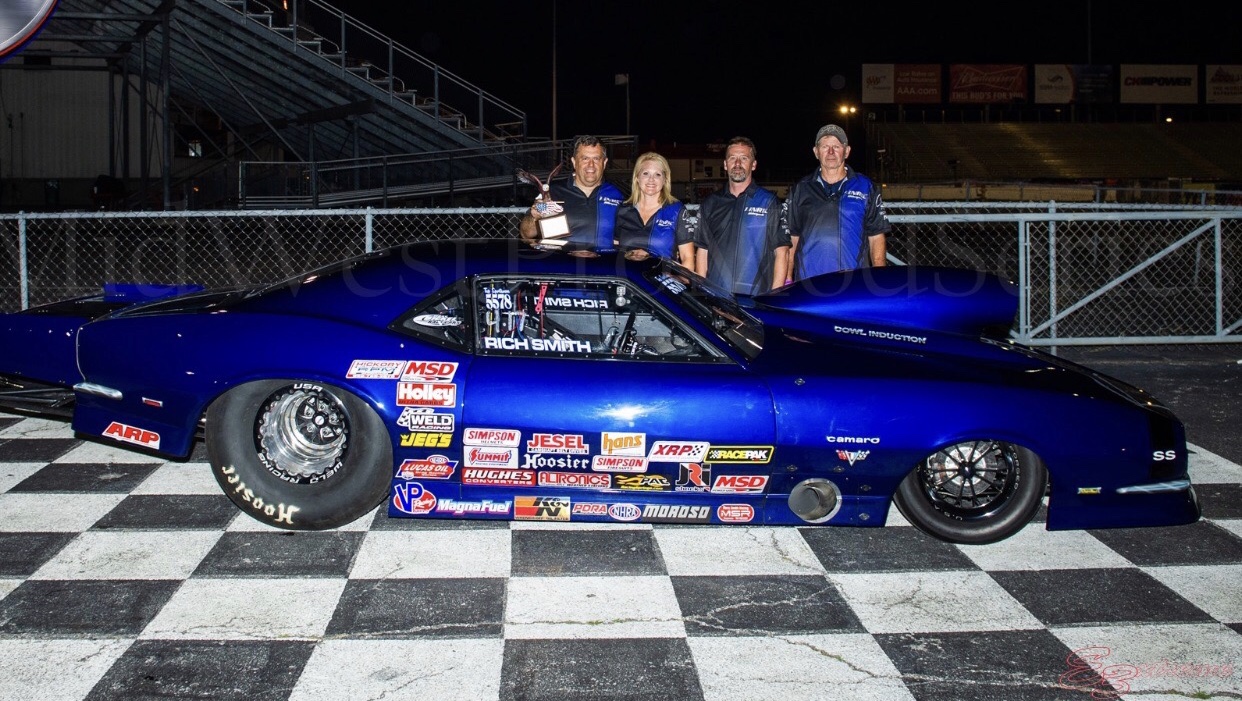 Runner up with the new bullet, runs 4 teens like a walk in the park. Big thanks to you and everyone at Reher!
Rich Smith 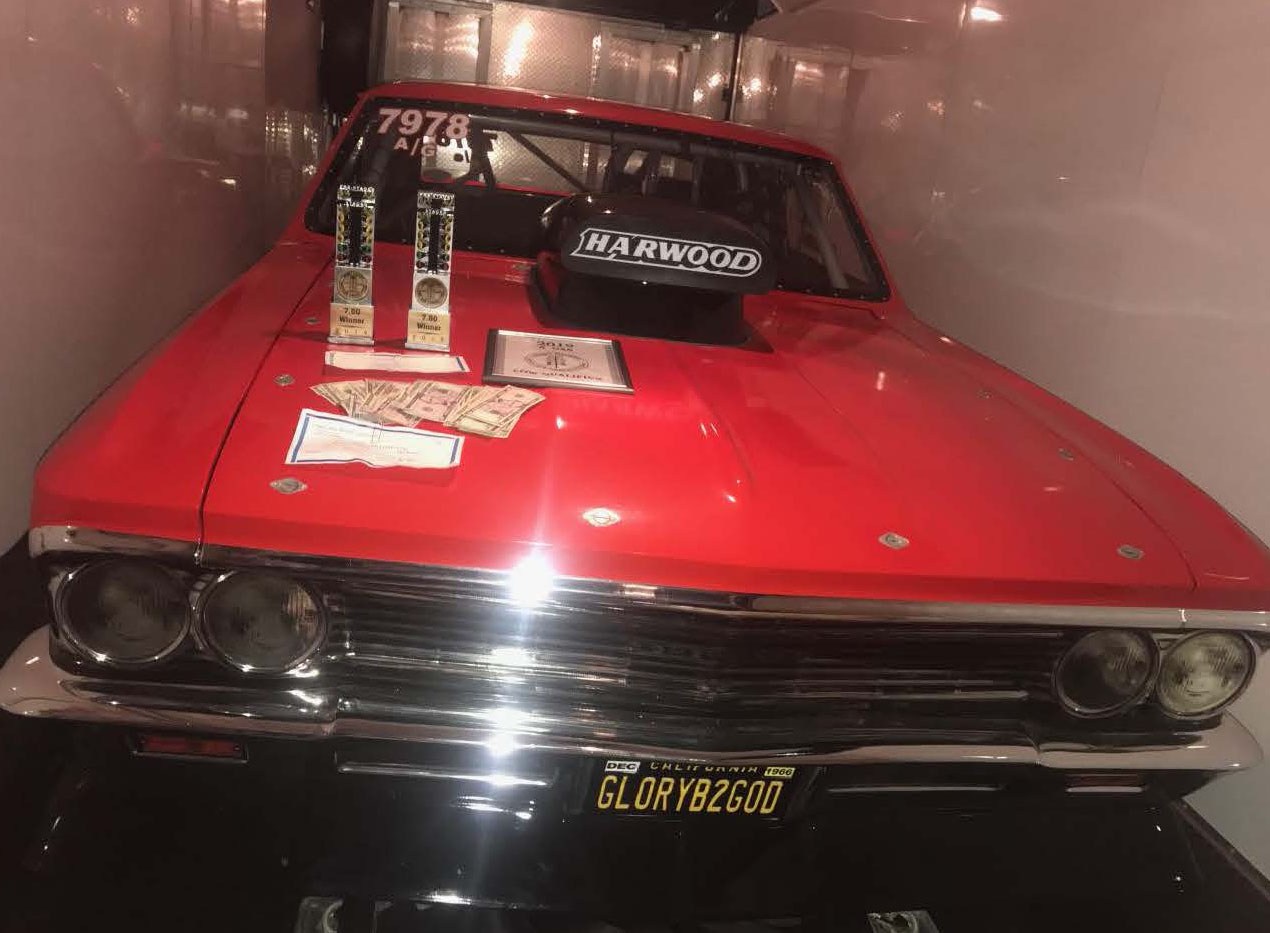 Thank you Mark and Reher-Morrison!! We had a two day race weekend and glory be to God thanks to your efforts and contribution building my 632, I was able to win both days! –Brent Bockover 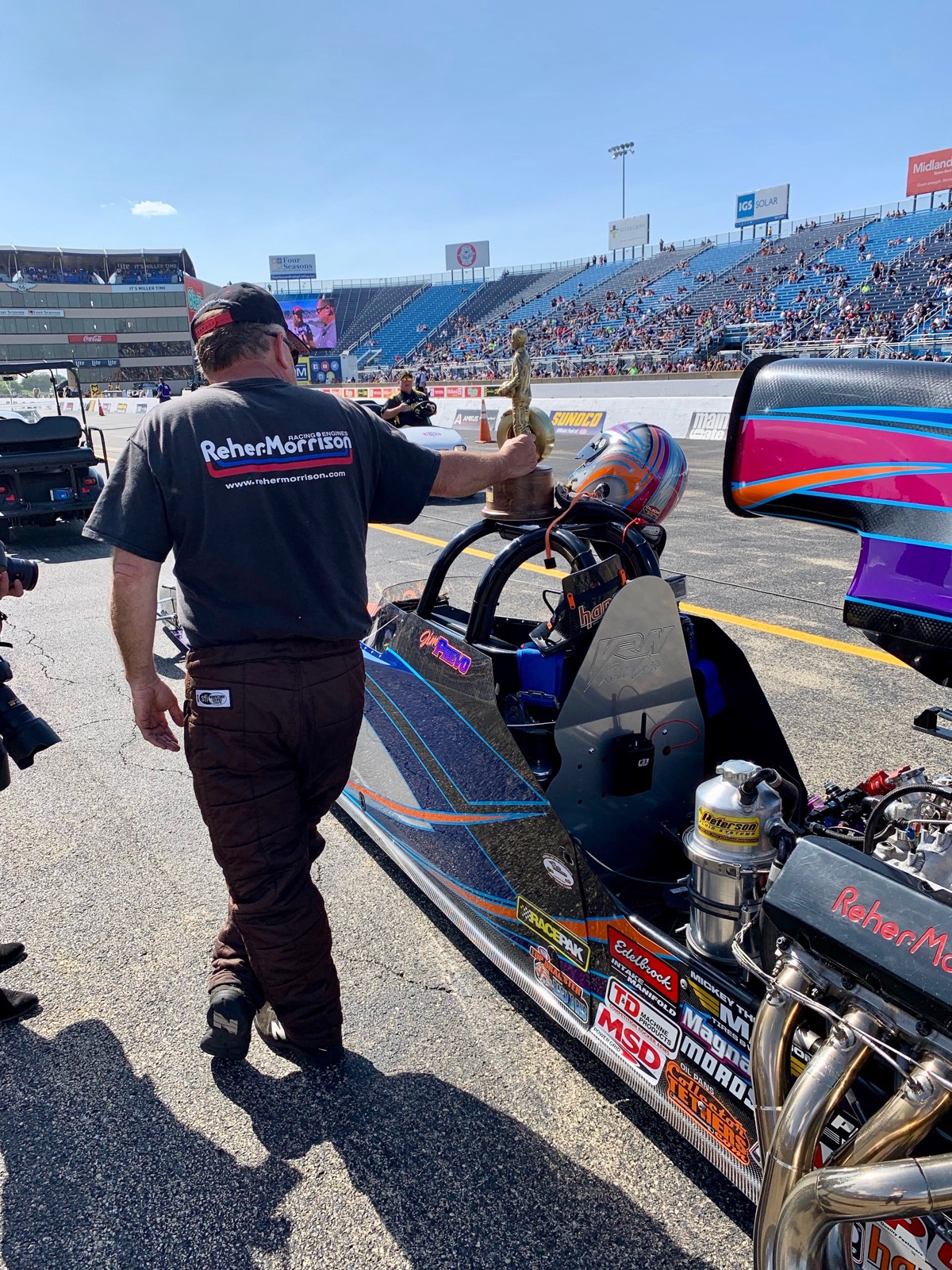 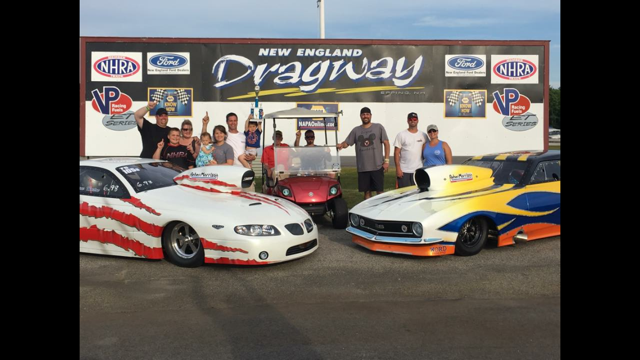 Congrats guys on your winner and runner up! 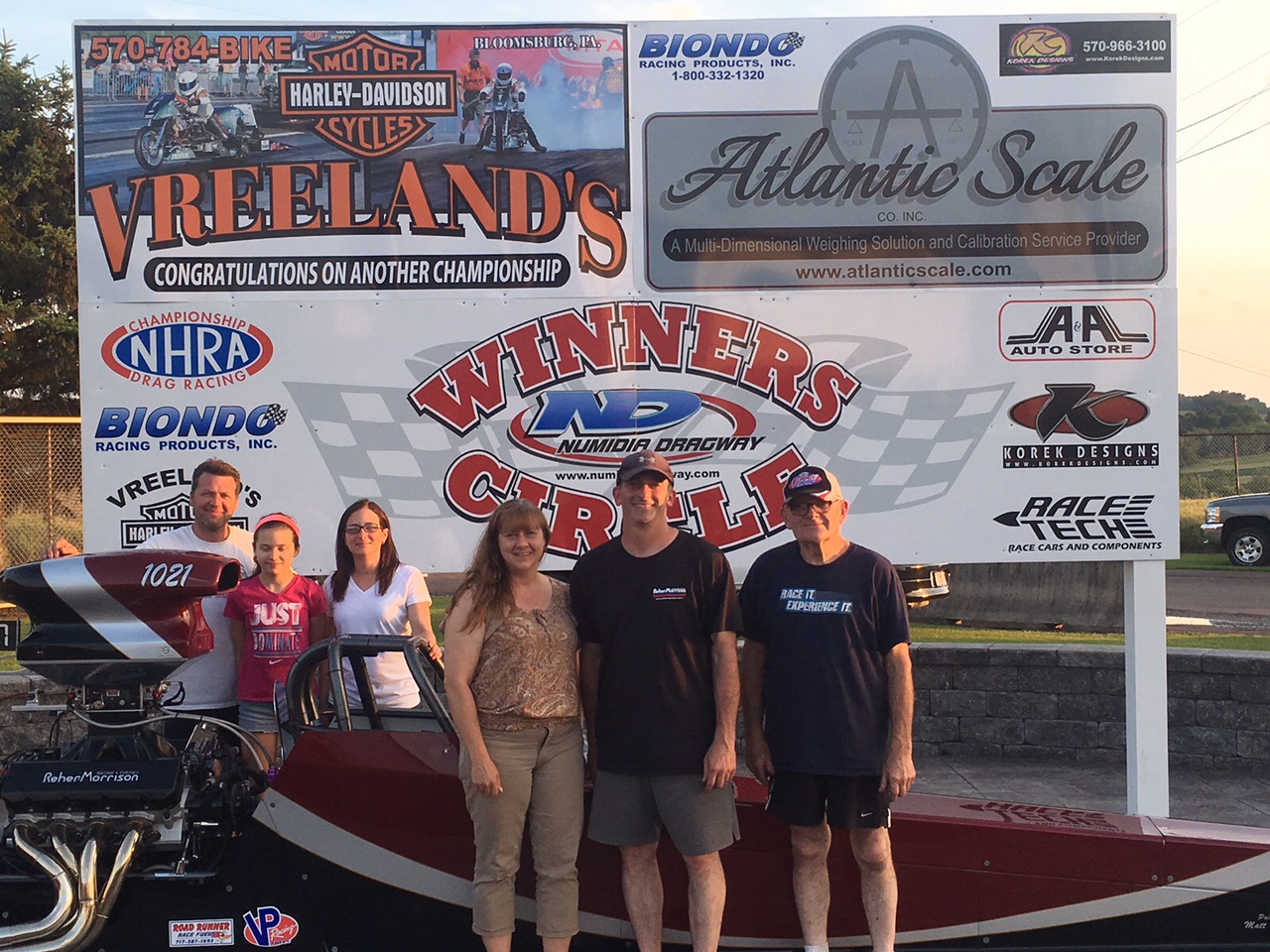 Hello!  I wanted to share a picture with you of my first win of the year with my new Reher-Morrison 583 Big Block engine.  I won this engine at the 2015 Sunnen Engine Charity Sweepstakes. Engine runs great!  7.04 @ 190 first pass off the trailer in 3000′ DA. There is definitely a 6.9 in there! 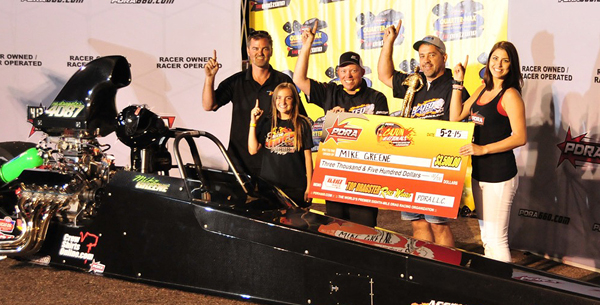 -Top Dragster-
Another first-time winner got the job done in Dart Machinery Top Dragster at Thunder Road, as Mike Greene of Burleson, TX., survived from the number 11 qualifying spot to beat number 12 starter Derrik Sholar in the final.

That left only the final, where a 4.16 against his 4.13 dial in got the job done for Greene as Sholar also broke out by a hundredth under his 4.22 dial in.

-Mike Greene-
“My 12º Raptor headed Reher-Morrison engine is the best, most consistent fast engine I’ve ever owned. I can run this car down the track like a bracket car and even drive it to the lanes and back to my trailer after a run. I can’t thank the guys at the shop for everything they do.
Thanks.” 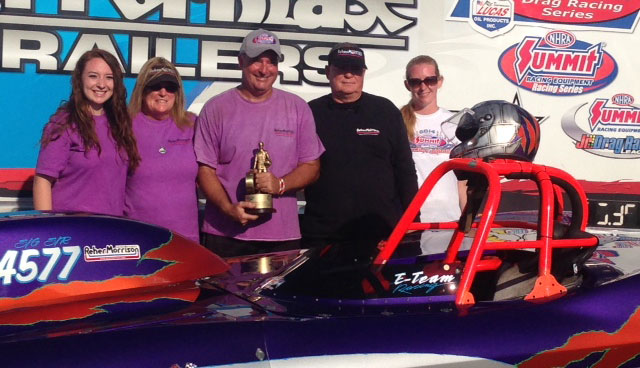 Congratulations to Chris Eidson on his Division IV Bracket Finals Championship! Chris won the Pro category and then went on to win the run off between Pro and Super Pro winner for the trip to Pomona and the bracket racing World Finals! 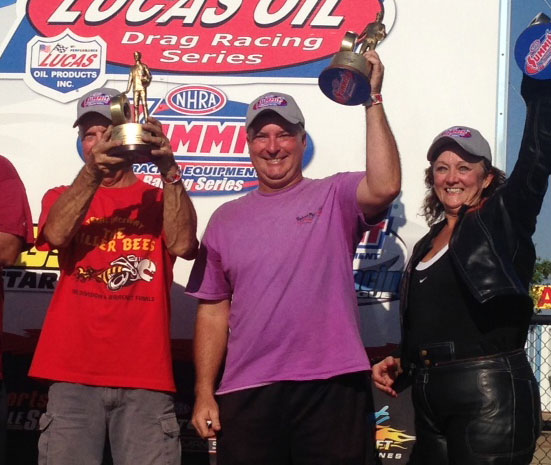 Chris utilizes a Reher-Morrison 565ci in his ’63 Corvette roadster. To win a bracket race championship it takes a good car, a good driver, and a dependable engine that can go 8 to 10 rounds, one after another. That’s what Chris got in his 565 Reher-Morrison engine. 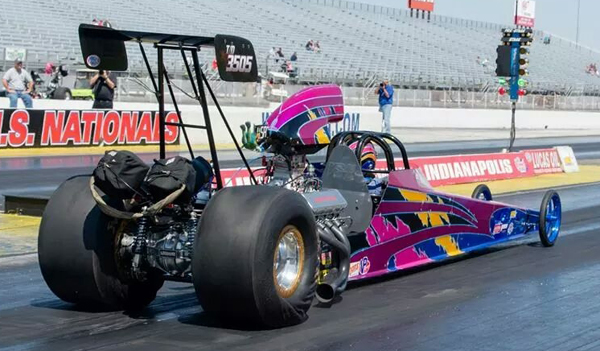 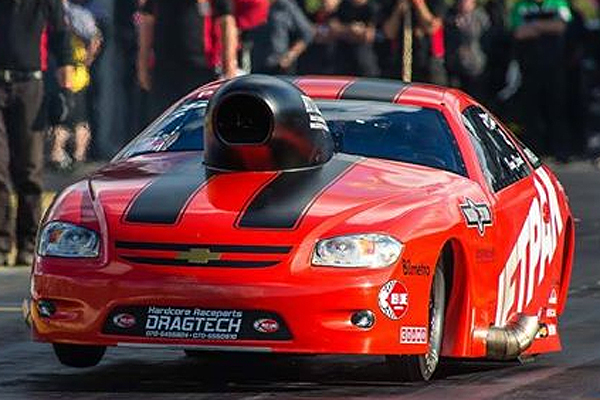 David and the Gang –
We appreciate the time and care you take to keep us running strong and Reliable.

Reliable Power is all we asked for and that’s what we got. Thanks!

Get New Posts by Email